Founded in 2001, the Greater Good Science Center at UC Berkeley sprang from the generosity and inspiration of Berkeley alumni Thomas and Ruth Ann Hornaday. 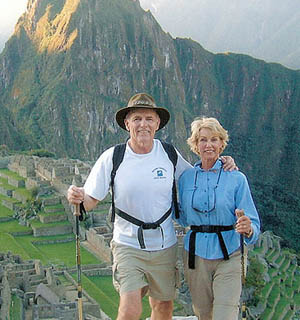 Believing that “you can’t have peaceful institutions without peaceful people,” the Hornadays wanted to create an interdisciplinary research center that would promote the science of inner and interpersonal peace. They found synergy between their interests and the research of UC Berkeley psychologists Dacher Keltner, Philip and Carolyn Cowan, and Stephen Hinshaw.

Together they imagined an organization that would not only sponsor academic research but also disseminate that research to parents, teachers, and other practitioners, helping them apply scientific findings to their personal and professional lives.

The Hornadays made an initial gift to establish the Center (originally called the Center for the Development of Peace & Well-Being), its fellowship program, and a series of public events. Together with funding from The Herb Alpert Foundation, the Hornaday’s gift also enabled the Center to launch Greater Good, a magazine reporting on groundbreaking new research into compassion, happiness, and altruism. The magazine offered a unique service to readers, providing a bridge between science and practice.

The Center published the first issue of Greater Good in 2004, and the response was overwhelming. The Utne Reader named it one of the best new publications of the year, and it nearly sold out of its first few issues.

Since that time, the Center has launched a variety of programs and initiatives—including its Raising Happiness parenting blog, seminar series for health professionals, summer institute for educators, and Science of Happiness online course—that build on the Greater Good mission to make “the science of a meaningful life” accessible and practical to the general public, bringing new research findings out of the lab and into families, schools, workplaces, and beyond.

Below is a timeline covering some of the milestones and highlights from the Center’s history so far.

2001: Berkeley Center for the Development of Peace and Well-Being is founded by Thomas and Ruth Ann Hornaday, under Founding Director Dacher Keltner

2009: Greater Good relaunches as an online magazine; GGSC initiates its Science of a Meaningful Life seminar series, with support from the Quality of Life Foundation

2010: Publication of two anthologies of Greater Good articles: The Compassionate Instinct (W.W. Norton) and Are We Born Racist? (Beacon Press)

2012: GGSC launches its Education Program, with support from the Einhorn Family Charitable Trust, to meet the needs of K-12 education professionals who want to apply the science of social-emotional well-being to their work

2014: The Science of Happiness online course begins, enrolls more than 125,000 students in its first run

As the GGSC continues to expand its activities and cultural impact, it is looking to people like you to help it grow even further. Visit the Get Involved section to learn how you can help the Center nurture and disseminate cutting-edge research. And if you would like to contribute to the Greater Good Science Center, please click Donate, or contact us at 510-642-2490 or by .(JavaScript must be enabled to view this email address).