Mendoza-Denton shares his insight into the writing process. 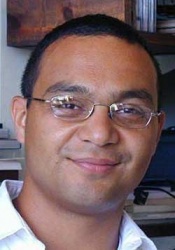 Mendoza-Denton, who received his undergraduate degree from Yale University and his Ph.D. from Columbia University, has been at UC Berkeley since 2002, and serves as faculty director of the University’s Greater Good Science Center. His research and writing covers stereotyping and prejudice—from the perspective of both target and perceiver—and intergroup relations and how these processes influence educational outcomes. He is co-editor of the anthology Are We Born Racist?, published by Beacon Press. He also maintains a blog by the same name.

Mendoza-Denton publishes widely in academic journals, with papers such as “The Power of a Label: Mental Illness Diagnoses, Ascribed Humanity, and Social Rejection” in the Journal of Clinical Psychology. His writing also appears frequently in popular media including Psychology Today and The Huffington Post. He is a prolific, articulate, and widely followed blogger. This will be the first time Writers at Work has featured a writer who works much in new media.

The Berkeley Writers at Work series is free and open to the public.  No reservations are needed. For further information on the series, please contact the College Writing Programs at (510) 642-5570 or email John Levine, jblevine@berkeley.edu.