For the first time, the Dalai Lama visits Santa Clara University for a talk concerning business, ethics, and compassion from the heart of the Silicon Valley. 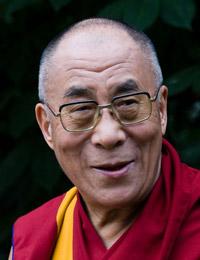 The Dalai Lama will be joined by the CEO of Dignity Health, Llyod Dean, for Business, Ethics, and Compassion: A Dialogue with the Dalai Lama. The event is cosponsored by two of the country’s premier institutes for the study of ethics and compassion—SCU’s Markkula Center for Applied Ethics and Stanford University’s Center for Compassion and Altruism Research and Education.

His Holiness the 14th Dalai Lama, Tenzin Gyatso, is the spiritual leader of Tibet. He was born on July 6, 1935, to a farming family, in a small hamlet located in Taktser, Amdo, northeastern Tibet. At the age of 2 he was recognized as the reincarnation of the previous 13th Dalai Lama, Thubten Gyatso.

His Holiness began his monastic education at the age of 6. In 1950, His Holiness was called upon to assume full political power after China’s invasion of Tibet. Following the suppression of the Tibetan national uprising in Lhasa by Chinese troops in 1959, His Holiness was forced to escape into exile. Since then he has been living in northern India, the seat of the Central Tibetan Administration.
In the decades since his exile, he has continued to work tirelessly for Tibet and has advocated the “Middle Way” policy in resolving the Tibetan issue whereby Tibetans are seeking genuine autonomy within the framework of the People’s Republic of China.
One of his greatest reforms came in 2011 when the transition to democracy was completed for the Central Tibetan Administration. The formal transfer of power to a democratically elected leader brought to an end the 368-year old tradition of the Dalai Lama being both spiritual and political head of Tibet.

In recognition of his opposition to the use of violence in the Tibetan struggle and for his work internationally for peace, human rights issues, and global environmental problems, the Dalai Lama was awarded the Nobel Peace Prize in 1989. More recently, in September 2006, he received the highest civilian honor in the United States, the Congressional Gold Medal, in recognition of his advocacy of nonviolence, human rights, and religious understanding.

Lloyd H. Dean
Lloyd H. Dean is a nationally recognized leader within and beyond the field of health care. He is president and CEO of Dignity Health, one of the nation’s five largest health care systems. His career in health care has spanned 25 years, during which he has brought operational discipline to leading health providers while also advocating strongly for reforms to the health system that would better align incentives to keep people healthy.

Since joining Dignity Health in 2000, Dean has strengthened and grown the organization into a national system with nearly $14 billion in assets and a reputation for high quality, compassionate care, operational excellence, and strong financial results. Last year, Dignity Health provided $1.7 billion in charitable care and services.

Dean is a board member of several companies including Wells Fargo & Company and has previously served as Board Chair and Board of Trustees member for the Catholic Health Association of the United States.

A strong advocate for health care reform, Dean directly participated in reform discussions with President Barack Obama and has been appointed to the State Healthcare Cost Commission charged with developing practical state policies to contain health care costs in the nation.