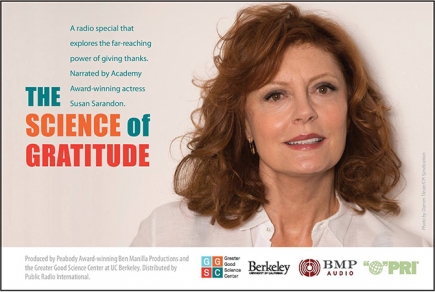 The Greater Good Science Center is thrilled to announce that our Science of Gratitude radio special has won the 2016 International Radio Program Awards’ Gold Medal in the Science & Technology category.

Narrated by Academy Award-winning actress Susan Sarandon, the one-hour documentary aired on more than 170 stations nationwide in late 2015 and early 2016. It was produced by the GGSC in collaboration with the Peabody Award-winning Ben Manilla Productions and the UC Berkeley Graduate School of Journalism with funding provided by the John Templeton Foundation. Ben Manilla teaches audio production at UC Berkeley.

The Science of Gratitude presented a series of stories that weave together scientific studies on the effects of gratitude with the voices of people whose lives have changed by practicing more thankfulness. Click below to hear a sampling!

The New York Festival’s International Radio Program Awards for The World’s Best Radio Programs honors radio programming and promotions in all lengths and formats from radio stations, networks, and independent producers from around the globe.