The Results of Our “Human Happiness” Student Video Competition

What makes you happy?

That was the question more than 400 UC Berkeley students had to consider before they completed Psychology 162 this spring. 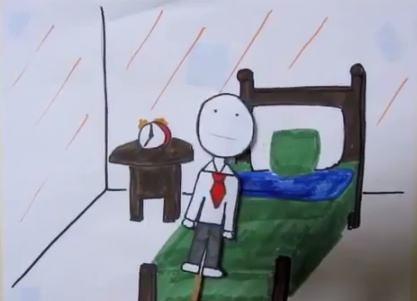 A scene from Bill's Story, the winner of our Human Happiness Student Video Competition.

This was no ordinary assignment, and it was no ordinary class. The class, called “Human Happiness,” was taught by Greater Good Science Center Faculty Director Dacher Keltner, a professor of psychology at Berkeley. Keltner offered his students an interdisciplinary tour of the new science of happiness, covering topics such as gratitude, awe, humor, and compassion.

Toward the end of the semester, Keltner presented his students with an unusual extra credit assignment: Produce a short video illustrating at least one of the key concepts covered in “Human Happiness.” The videos had to be short (1-3 minutes), draw on the material they covered in class, and answer the question, “What makes you happy?”

Working alone or in groups, more than 100 students submitted a total of 60 videos. Keltner says he was blown away by the results.

“What you want as a teacher is for students to engage with the material really deeply and take it in their own directions,” he says. “You can never quite see that on an exam. But this assignment really captured the students’ vision—their personal voice, the depth of their reflection. It brought tears to my eyes, to be honest.”

Greater Good staff narrowed the pool of 60 submissions to 10 finalists, which it then presented to an illustrious panel of judges, including:

After careful deliberation, the judges scored the videos, and we are now pleased to present the winners of our first-ever “Human Happiness” Student Video Competition. Here they are:

Bill’s Story, by Jessica Berrie, Stephanie Rotter, Kara Torbert, and Katey Watry. A charming and clever illustration of a deep scientific finding: that social connections, not wealth or status, are the key to happiness.

What Makes You Happy?, by Elizabeth Carey and Melody Tien

What Makes Me Happy?, by Vivian Nguyen

What Makes You Happy?, by Kristy Kwak and Julia Park

Green with Happiness, Not Envy, by Chris Chin

A One Minute Guide to Happiness, by Sheba Plamthottam

The finalists will receive copies of the documentary Happy—an engaging tour of the science and practice of happiness—or Taran’s uplifting Project Happiness film.

We’re grateful to all of the “Human Hapiness” students who submitted a video. The judges stressed that their decisions were not easy. “Each one had something special,” says Taran.

As a whole, the pool of submissions is a testament to the creativity and intelligence of UC Berkeley students—plus it gives a nice introduction to the science of happiness.

“All of these made me happy!” says Marx. “They’re wonderful, creative, fresh, inspirational. They are all winners!”