Discover the Power of Character 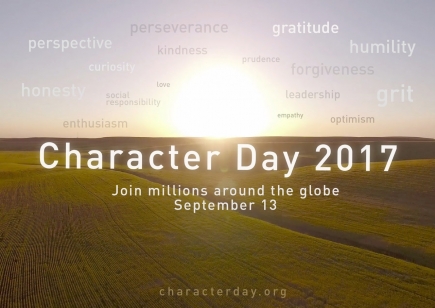 In light of everything happening in our country right now, I love what happened during the August 21 eclipse: so many people were looking up at the same time, thinking about their place in the world.

It’s so powerful when people all do something in unison, especially something that reminds us about what connects us as humans, rather than what divides us. Which is part of why my film studio creates global days of film, discussion, and speakers around universal and important topics shaping our lives. There are now over 114,000 groups from all 50 states and in 109 countries signed up to participate in the fourth annual Character Day on September 13th, which is all about the importance of developing our character and living with meaning and purpose.

Please join the worldwide conversation and initiative by signing up. It takes two minutes and is free. Sign up at characterday.org

What is “character”? It’s the qualities you value, the qualities that make you you, like leadership, curiosity, creativity, enthusiasm, self-control, honesty, appreciation of beauty, and so much more. And focusing on and developing those qualities—throughout your life—is what’s going to help you find that sense of happiness, meaning, and purpose.

Research shows that having a sense of purpose in life—no matter when in life you find it—can have extraordinary benefits, including living a longer life. In other words, find your mission in life, and you’ll have more life to achieve it.

You’ll also be a lot happier along the way. A study done by Veronika Huta and Richard Ryan has shown that adopting a “meaning mindset”—living with purpose—results in decreased stress and improved well-being. And as research by psychologist Carol Ryff and colleagues has shown, this isn’t just in their heads. People who describe themselves as living meaningful lives are actually healthier than those who describe their lives as happy but not necessarily meaningful. Their cholesterol levels were lower, their weight is healthier, and they sleep better. They have lower levels of cortisol, the stress hormone, and less risk for conditions like Alzheimer’s and cardiovascular disease.

What brings you that sense of meaning and purpose is unique to you. So what’s the world asking of you? Not an easy question, but we want to help people answer it.

Which brings us to Character Day, our organization’s global initiative, now in its fourth year.  Each year, on a single day, people around the world use film, discussion materials, and more to focus on these issues in their companies, organizations, universities, schools, and homes. What does it look like when we stop the business of stressful events, news cycles, posting, emailing, and focus on the big things that matter? Join us and find out.

We have a new 10-minute film that will premiere this Character Day called 30,000 Days that is all about old and new ideas about living life with meaning and purpose. All events can also screen our short films The Science of Character, The Adaptable Mind, and The Making of a Mensch, which explore ideas about flourishing in the 21st century. We provide free discussion materials to all participants, as well as an online Global LiveCast Q&A featuring speakers such as Angela Duckworth (Author of GRIT), Moby (musician), Krista Tippett (NPR’s show On Being), Soren Gordhamer (Wisdom 2.0) and Emily Esfahani (Author of Power of Meaning) and many more.

We expect over 120,000 events this year and would love for you and your company, organization, or school to be part of it. Everyone is encouraged to create their own distinctive event at any time of the day and in any place on Wednesday, September 13, 2017. It’s all free. Organizations already signed up include top tech companies like Twitter and Intel, the US Air Force, museums and schools across LA & SF Unified School District, and universities including UC Berkeley, Harvard, MIT, and UT Dallas—as well as homes around the world.