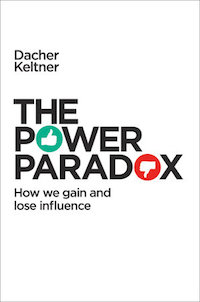 Greater Good Science Center director Dacher Keltner has spent more than 20 years studying how people gain, use, and abuse power—and his findings have revolutionized our understanding of how power works.

Keltner shares what he has learned in his new book, The Power Paradox: How We Gain and Lose Influence. The book grew out of a seminal essay, also called “The Power Paradox,” that Keltner wrote for Greater Good; in it, he turns conventional wisdom on its head.

“Guided by centuries of advice like Machiavelli’s . . . we tend to believe that attaining power requires force, deception, manipulation, and coercion,” he writes. “As seductive as these notions are, they are dead wrong.” Instead, he explains, “years of research suggests that empathy and social intelligence are vastly more important to acquiring and exercising power than are force, deception, or terror.”

Get Your Own Copy!

Purchase a copy of Dacher Keltner's new book, The Power Paradox: How We Gain and Lose Influence (Penguin Press, May 17, 2016)

As Keltner convincingly demonstrates in his new book, power comes not to those who are imposing or ruthless, but to those with social intelligence and empathy. Meaningful influence, the kind that endures, comes from a focus on the needs of others. Above all, power is not won, but given to us by other people. This is what we all too often forget—and, research suggests, feeling powerful impairs the very skills of social intelligence that are vital to maintaining power and wielding it responsibly. That is the crux of the “power paradox.” By misunderstanding the behaviors that helped us gain power in the first place, we set ourselves up to fall.

How we handle the power paradox guides our personal and work lives and determines, ultimately, how happy we and the people we care about will be. Brimming with fascinating case studies and including 20 original “power principles,” The Power Paradox lays out exactly how we gain and retain power; when we are likely to abuse power; the consequences of letting those around us languish in powerlessness; and why power can be a demonstrably good thing.

“Dacher Keltner is the most interesting psychologist in America. He’s busy changing the minds of Americans about how power works, how inequality works. It’s only a matter of time before his ideas spread everywhere. And unlike most psychologists I know, he’s not a weirdo.” —Michael Lewis, author of The Big Short and Moneyball